I’m a sucker for the monumentality of great beasts: big dogs, the Highland coos of Scotland, my cousin’s appaloosa, donkeys, even taxidermied bears. I suppose they make me feel small again, child-like, but definitely a little vulnerable. If allowed, I’ll nuzzle their coats, fondle their ears, and slap their dusty sides. Art museum docents usually frown on that degree of…visitor interaction, but believe me, the temptation was there at Nick Cave’s AMOA-Arthouse show, Hiding in Plain Sight.

The world of objects – both natural and man-made – is at Cave’s disposal in the production of his Soundsuits. The Chicago-based artist, who studied with the Alvin Ailey Dance Theater, crafts massive suits – I’m hesitant to trivialize them with the word “costumes” – from sticks, stuffed animals, rugs, buttons, and all manner of fibers. The Soundsuits loom above the viewer, some as tall as 10 feet, and they are intimidating. In close proximity to the Soundsuits, I am reminded of Where the Wild Things Are. They have the same blend of danger and guardianship as Sendak’s creatures. In the gallery-space the Soundsuits are presented with mannequins as supports. Each one, as their names suggest, has the potential for a unique voice: the twigs would rattle, the fibers would sshh, and the stuffed toys would make a muted, cottony, shifting sound. I highly encourage the viewer to experiment with some beatboxing in the imagination of such possibilities. 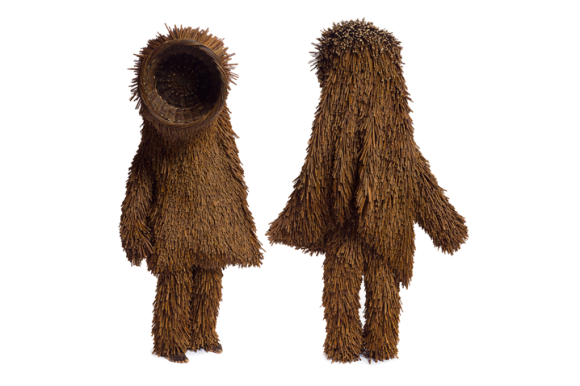 Fortunately, the exhibit is supplemented with two wonderful videos that show Cave’s works in action. One is a recording of a street performance with dancers suited up almost as Koosh Balls. Their great, colorful fibers jiggle and gyrate with a captivating and playful madness. The other video, screened in the viewing room, is a hi-fi production by the artist, featuring suited performers on a white set. My favorite part is the introduction of pogo-sticks, and the subsequent slowing of the footage that highlights the throbbing articulation of each fiber with every spring. Truly, it’s just gorgeous.

Hiding in Plain Sight, like all of Cave’s work, is refreshingly multi-disciplinary in its blend of performance art with visual art. It is joyful to behold, and a deeply-rooted humanism is apparent in his creative activity. I also appreciate the subtle danger element to these suits: their facelessness, their massiveness, their inherent life.

In closing, I want to share a lovely quotation from the artist, which AMOA-Arthouse includes in its online material: “The arts are our salvation – the only thing that allows us to heal and also helps us dream about what will make the world a better place. I have a responsibility to the world to do something with my abilities as an artist.”

Nick Cave: Hiding in Plain Sight is on view at the Jones Center at AMOA-Arthouse through February 24, 2013

I encourage further reading on Nick Cave, especially on this work as a response to the beating of Rodney King. The physicality of his works is a significant theme.